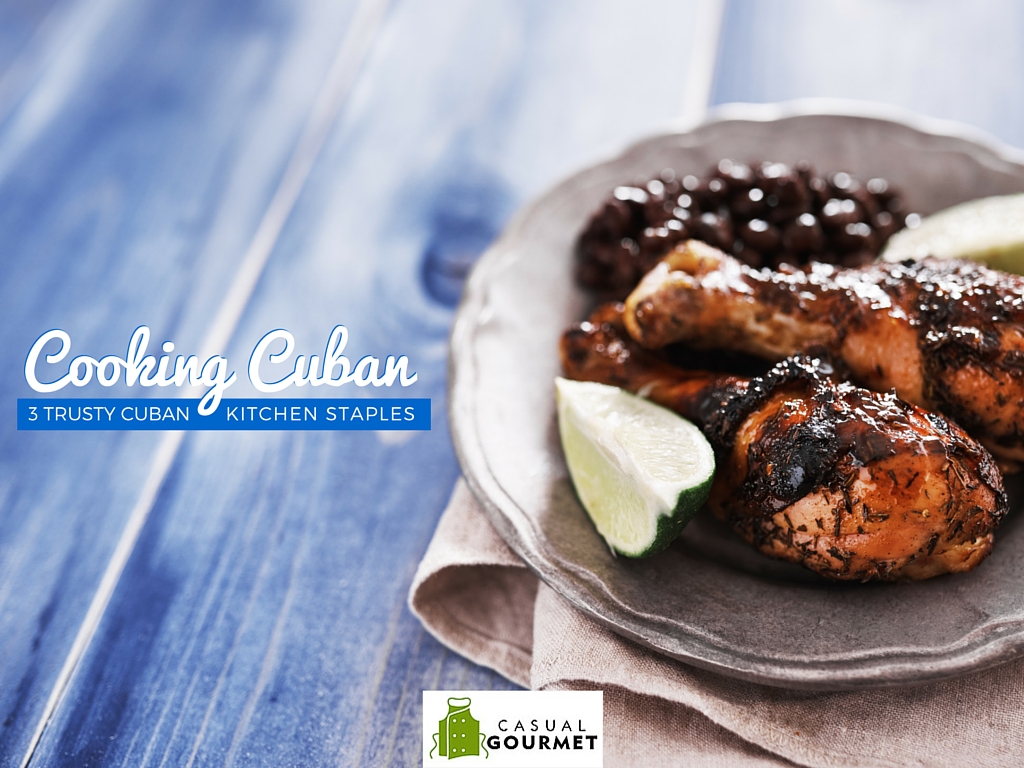 If you’ve ever visited Miami’s Little Havana and you’re familiar with all of the sights, smells, and culture of Cuban food, then you already know how delicious and complexly-flavored Cuban cuisine can be.  A true fusion of multiple cultures, Cuban cuisine is a culinary melting pot of the early Caribbean slave trade.  Cuban food is influenced by French, Spanish, Arabic, African, Portuguese, and Eastern cultures founded by the many occupants, drifters, and settlers in Cuban history.  Cuban cuisine, however, doesn’t have to be complex and often is quite simple.  Here are 3 kitchen staples of Cuban eating that can help you learn how to cook Cuban food.

The Big Picture: The Cuban Kitchen

Before we dive too deep into individual dishes, it’s important to understand a bit of the Cuban culture, what spices are commonly used, and what you should keep in your kitchen for cooking Cuban.

Cuban cuisine is extremely simple.  Considered a “peasants’ cuisine”, weights and measurements of ingredients are often disregarded, spices are kept simple and are readily available, most dishes are sautéed or slow cooked, and little to no rich ingredients such as heavy cream are used in traditional Cuban kitchens.  With that said, here is a list of some items you should keep on hand at all times for Cuban cooking:

Served as a side dish or as an entree, black beans and rice is a Cuban staple.  As with most Cuban dishes, the recipe starts with a sofrito: a combination of sautéed vegetables often including the ones mentioned above with some garlic and cumin added for flavor.  Once sautéed and fragrant, the sofrito is added to cooked black beans and often allowed to simmer for several minutes or even several hours.  Add some rice seasoned with cilantro, and you have one of the staples of Cuban food!

Literally translated to “old clothes,” Ropa Vieja gets its name from the tattered, shredded appearance of the beef after cooking.  This Cuban classic involves slow cooking beef with a sofrito until the meat is fall apart tender and easy to shred with forks.  After making a sofrito of onion, bell pepper, and garlic, the beef is briefly seared on all sides until the outside of the meat browns.  Once seared, the beef is placed in a crock pot or Dutch oven along with the sofrito and either water or beef broth and allowed to slow cook for several hours.  The result is a tender, juicy, and extremely flavorful dish.  Serve over rice and enjoy!

Perhaps the most familiar of Cuban dishes to the average American is the Cuban sandwich.  Packed full of pork and ham and often seasoned with mustard, pickles, and melted Swiss cheese, you can’t go wrong with this Cuban original.  Start with a traditional French loaf and add a few slices of ham and roasted pork.  A more Americanized version of the dish is to use pulled pork or a variation of Ropa Vieja made with pork instead of the more traditional beef.  Add a slice of Swiss cheese (or two if you like extra) and a handful of pickles topped with mustard to complete one of the simplest traditional Cuban dishes.

Cuban cooking is simple, fun, and can make some incredible dishes for you and your family at home without traveling to Havana.  With a little knowledge of the Cuban culture, the available fruits, vegetables, and meats along with an understanding of the basic Cuban kitchen, you can be well on your way to making excellent Caribbean food at home.  If you’re looking to hone your skills in the kitchen or just want to learn how to be a better home chef, try signing up for one of The Culinary Institute of Virginia’s Casual Gourmet cooking classes.

DISCLAIMER – Casual Gourmet makes no claim, warranty, or guarantee as to actual outcomes for past or current attendees. The Casual Gourmet website is published for informational purposes only. Every effort is made to ensure the accuracy of information contained on the CasualGourmet.com domain; however, no warranty of accuracy is made. No contractual rights, either expressed or implied, are created by its content.